When the strike happens, it will be on the east coast.....

Today, our credit was upgraded from AA to AAA, while the Russian credit was downgraded by one click.  This makes it harder to get loans and the interest rate is increased for the poor.  I call this grinding upon the face of the poor.  There is a specific way that God deals with this.  Those that do so get the punishments of Sodom.  Babylon will fall in a day.

Folks, the Mp said that the trap that the US sets for other nations, will be used against us.  We will lose our financial system and the destabilization that was used by our greedy politicians, banksters and many others in other lands, to suit our own purposes, will be used in this very land as the black horse rises up against the white horse.  We will fall in the very pit that we digged to ensnare other nations.  A generation of vipers shall not escape the damnations of hell.   We (you and I and our fathers) have lived fatly off the system that has relied on the exploitation of others' wealth and resources.  For this, our nation will collectively pay for not having followed Godly principle in executing every detail.  It will happen within this year.  Is Russia perfect?  NO!!  But, as I explained to my daughter tonight about how God operates, he will use another corrupt/greedy nation to punish the one who had the light and was given the best shot to lead the world into a good place.  Russia (and China) will be used to bring us low - just as the Nephites fell and the Lamanites were the means to bring them low in judgment.

From the ashes will rise the new kingdom that all nations will flow unto - the last kingdom that Daniel spoke of.  This one will never fall.  The end of the world does not occur in October 2016 - that will be for a decade or more into the future after the nations have been scoured by the 144,000 for the last time before the end comes and the purification and sanctification of the earth takes place as it is advanced to it's terrestrial status.  What does occur in 2016 is the FINAL breaking of the back of the existing power structure of banking, world politics, world leadership of the A/C and the false prophet.  This re-ordering paves the way for the new order that will have Christ as it's head.  Truly, this will be the hope of all nations.

Here is what got me spun up:

Watching the Russians… Off Florida’s Coast 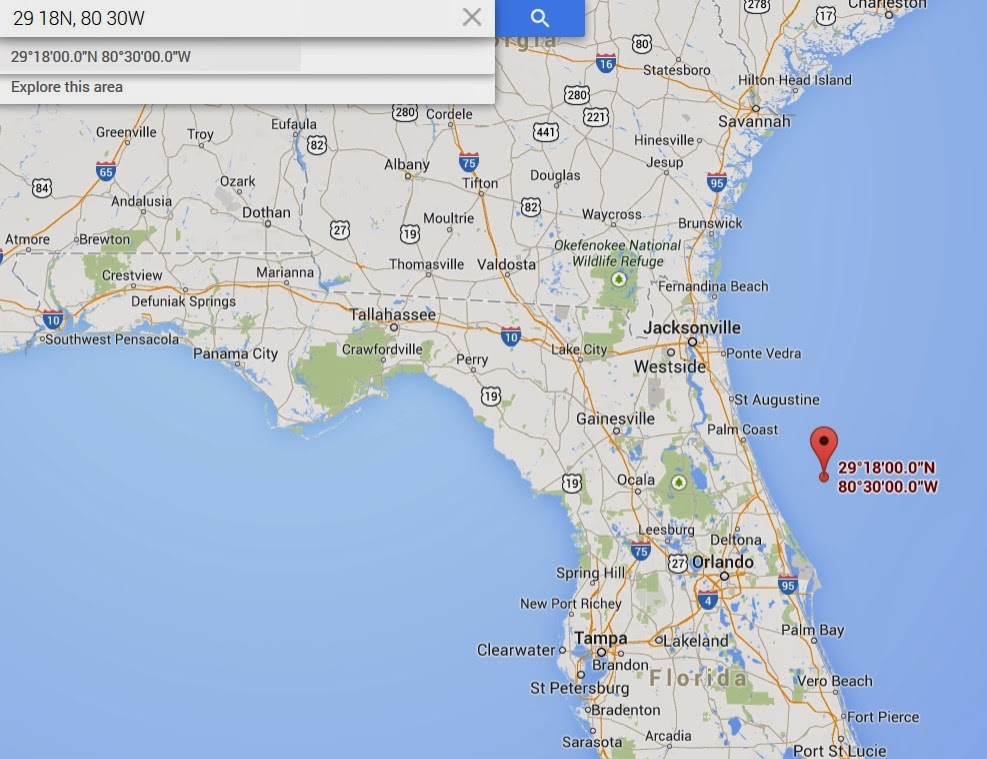 Information Dissemination – by Galrahn
Tom Hill @te3ej has been tracking the Russian Tug Nikolay Chiker for the last few weeks as it made its way down to Cuba with Russia’s premier spy ship the Viktor Leonov CCB-175. Yesterday Tom Hill noted the tug has taken up position just off the coast of Florida – now for two days at 29 18 00.0N, 80 30 00.0W.
While some mock the Russians for always deploying tugs with their Navy, I’ve grown to appreciate it as I have now observe them use the tugs effectively both in soft power operations and now military operations like trapping the Ukrainian fleet. Navy’s can do a lot when they have ships with incredible utility like Fleet tugs, indeed one might ask how the US government screams really loud about climate change, but doesn’t build ships like icebreakers and fleet tugs. Like I’ve always said, we should all start to actually worry about the effects of climate change the day the government starts buying a bunch of those types of ships, because that will be the day the government is legitimately worrying about it.

The Nikolay Chiker is widely considered to be one of the worlds most powerful ocean tugs, but more important from this observers perspective, the tug seems to always be escorting high value assets of the Russian Navy when it deploys.
So the question is, why have the Russians parked their premier Northern Fleet naval tug off the coast of Florida? There are probably several valid reasons, but if I was to speculate, the following two reasons strike me as the most likely.
The ship is observing the launch of Falcon 9 SpaceX CRS3 scheduled for early Sunday morning from the SLC-40 Cape Canaveral Air Force Station. SpaceX’s Falcon 9 rocket will launch the Dragon C3 for its fifth operational cargo delivery mission to the International Space Station. The flight is being conducted under the Commercial Resupply Services contract with NASA.
In addition to that though, during previous visits to the US east coast by the tug, US media reported that Nikolay Chiker escorted Russian nuclear attack submarines that were patrolling our coast at the time. Given circumstances taking place in Ukraine, I think it is very possible that Nikolay Chiker is staying near Cape Canaveral for legitimate reasons (to monitor the launch) but is also standing nearby as one or more Russian nuclear attack submarines monitor US Navy activity out of Kings Bay, Mayport, and or Norfolk during a period of political crisis between the US and Russia.
Indeed, given the presence of Nikolay Chiker off the Florida coast and given the events unfolding in the Ukraine, I believe it would be foolish not to assume that Russia is operating submarines off our East coast naval bases.
Special thanks to @russiannavyblog for assisting me thinking through this activity as we have observed/discussed it together on Twitter the last few days.
Posted by Galrahn at 10:00 PM
Posted by IRAQ at 9:40 PM